From Boys to Young Men
FOR EXPRESSIONS OF INTEREST FOR THE
2015 RETREAT
PLEASE EMAIL NIC MORREY
contactnicmorrey@gmail.com 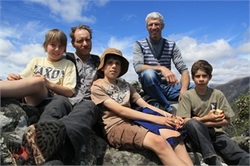 Nic Morrey, a child and family psychologist from Melbourne Australia, has developed an exceptional boy’s education initiative called ‘From Boys to Young Men’. This unique Bali holiday program is suited for adventurous fathers and their boys (10-14 years old) who wish to grow in themselves and develop stronger bonds with each other. It is an opportunity for boys and men to share stories without fear of judgement or competition, with respect and confidentiality.

"There are not many rites of passage for boys growing up in Western society, apart from perhaps getting a license and drinking alcohol legally at 18. In my private practice, dads are crying out for a depth of connection with their sons which are being disrupted due to a father's heavy work load in combination with a technology saturated world. There is an absence of guidance into adulthood for young people and this holiday program will support fathers in their necessary role using adventure, fun, the powerful tool of rites of passage and initiation to guide boys toward manhood.”
Nic Morrey

Ubud offers a sanctuary, a place where culture connects intimately with its land and spirituality. Going away is a part of making this time very special for the boys.  They will remember this as the time in their life which signified the beginnings of growing up and becoming a young man.  It needs to be done via a journey away from home, a calling toward adenture, towards risk as opposed to danger, toward the unknown where they will discover a part of themselves which they do not yet know about.  It is also a chance for the boys to develop friendships which may take them into their adult years. The retreat includes immersing the boys within Balinese culture, including a Balinese water and coming of age ceremony for our boys using ritual masks, and visiting the green school, a school set up for western kids but with a different approach to education. Kadek Gunarta (co-founder of Bali spirit festival) and Ketut Arsana (most renowned Ubud healer) will also play a part in the 5 day program, offering their unique contributions & culturally rich insights including teaching Gamelan & Kecak and coordinating a friendly soccer game with our boys and the local boys. 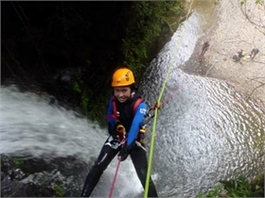 What is a Rite of Passage?
Rites of passage and initiation into adulthood through ceremony and the passing on of wisdom from men to boys has always been a fundamental part of indigenous and tribal cultures but is generally lacking in the West.


The term ‘rites of passage’ is about passing on core values, beliefs, and skills and involves training, guidance, preparation, challenge, ceremony and celebration presented by same sex 'elders'.  There is a life challenge at this developmental age (10-14 years) and participants will explore this together.  This challenge is an opportunity to set the stage for creating a healthy man.  The term ‘Initiation’ refers to solidifying a new identity, helping boys figure out how to function and fit into the community as respectful and responsible young men. The simple but powerful initiations used in this program evoke a sense of awe and create lasting images long remembered and treasured.

Why with us?
The program is created through the 'hero's journey' educational framework which uses 7 steps (Calling, Departure, Following, Challenges, Abyss, Return and Home-coming) to provide a symbol rich and powerful process to help acknowledge the sons journey into beginning manhood.  This program meets the developmental needs of growing boys and supports the necessary guidance of fathers and male mentors to help them gain an understanding of their relationship with themselves, others, spirit and the world.  There is a focus on the pressing concerns of safety, dealing with emotions, values, responsibility, and self awareness.  Boys need the strong presence of fathers now, before adolescence, and this program cements a father’s role and facilitates a son’s journey into becoming a young man.

Who's in the program this year? 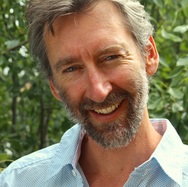 is a Psychologist (BSS Hons; MPsych Child & Family; M.A.P.S), Yoga & Zen Practitioner with over 16 years experience in the Community Health sector , 7 of those years facilitating a men's shed.  He now works in private practice with individuals, couples, children and families at 'The Clinic 279 Gilbert Rd, Preston 3072 Melbourne, Australia. Nic has been travelling to Bali for a number of years and is the founder of the program 'From Boys to Young Men', developed due to a gap within Australian cultural values. His model is strongly influenced by the works of Steve Biddulph (Raising Boys), Arne Rubinstein (Pathways to Manhood) and Andrew Lines (The Rite Journey). Nic also runs an October retreat in Ubud Indonesia once a year for those interested in the Psychology of Spirituality. Nic is the National Convener for the Australian Psychological Society's Transpersonal Psychology Interest Group. 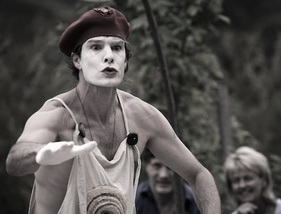 is an accomplished Mime and Children’s entertainer and transpersonal facilitator who has performed around the globe.  His workshops have developed when working with special needs clients.  He has found an avenue for his powerful unique style and teaching within schools, indigenous communities, detention centres and in programs such as Life Without Barriers, Youth Connections, Oz Harvest, and Jewish Care and created an English based learning program for indigenous Indian children using mime.  James’ training began in England and has continued in Australia including Mentoring with Youth, Cert in Mental Health, Cert in Yoga, Steiner Teacher Training, Zen Shiatsu, Clowning, Improvisation and Acting and Bachelor of Education.

is a Psychologist (BA Hons; Assoc M.A.P.S) with a long  history of  working with both adults and young people in the community sector.  In recent years he has been running a ‘Bush Adventure Therapy’ program for adolescents - wilderness experiences with a strong initiatory element.  He is comfortable in Bali, having been a regular visitor there and will co-facilitate the adventurous  components of the retreat.  Click on the link here to see what Andy does in the Northern Rivers NSW.

was born in the village of Padang Tegal, Ubud, and grew up in a family of traditional Balinese shaman healers (Balian).  The healing tradition was passed on from his grandfather and previous ancestors.  Ketut developed a more broader  and more universal practice of healing and spiritual knowledge and is the spiritual teacher of Asram Munivara, a Mahatma Therapist, Master Usada Practitioner, Yoga Instructor and founder of Ubud Bodyworks Centre, Ubud Aura Retreat Centre,Ashram Munivara and Santam Bhuana Foundation. Ketut has developed a unique yoga class for fathers and sons.  His favourite sessions are when young boys are a part of his classes.  He is exceptionally funny and has been a highlight on past retreats.

comes from a long lineage of socially minded Balinese. His great-grandfather, the head of The Sacred Monkey Forest restoration project in Ubud, and his mother, a school principal for over 30 years, are just two of his role models. In addition to community projects, Kadek is an inspired natural architect, handling many building projects and also Dek’s Studio, a restored wood business. Kadek is also the Co-founder of the BaliSpirit Festival which showcases the Balinese approach to harmonious living, in the hope that participants will then take these ideas out into the broader world.  Kadek has also been a role model for the youth, raising awareness of HIV and AIDS in school outreach programs teaching kecak dance, Gamelan and will also coordinate the young Australian and Indonesian boys playing a friendly soccer match and the coming of age ceremony.